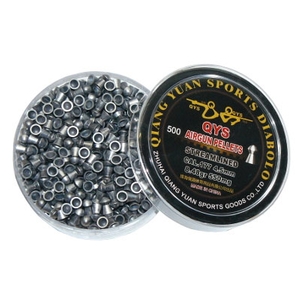 This product is only available to buy if you are over 18 years old. Why?

Qiang Yuan Sports Streamlined FT Domed Grade .177 (4.49) Pellets x 500 - 8.48gr. Established in 1994 they developed their own technology and processes to rapidly produce some of the most accurate pellets ever manufactured, producing outstanding medal tallies in every Olympic Games since Sydney in 2000-a staggering total of 10 Golds, 4 Silver and 5 Bronze as well as scores of medals in World Cup events for both rifles and pistols (Official ISSF Data). Now Distributed in Germany, Switzerland, Norway, Denmark, America, Canada, Russia, India, Korea, Japan, Thailand, Australia, South Africa and 20 other countries.

The slight premium price is cancelled out by outstanding quality and consistency.

These pellets are the best on the market

Very high quality pellet worth trying to see if they match your barrel.