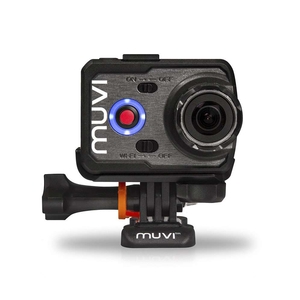 Prev
Next
« View all Action Cameras

Capture ultra high-resolution 4k or 2.7k video with amazing quality and clarity. The K-2 Pro also allows you to film in full high-definition at 1080p at 60fps or 720p at 120fps, perfect for slow-motion play back.

For photos the Muvi K-2 Pro captures high quality 12MP resolution photos and has a selection of photo modes for you to capture images the way you choose, including time lapse, high speed photo burst and 180° rollover mode. The built-in G-sensor auto-start will set your Muvi K-2 Pro to start recording on a change of gravity.

Included in Muvi K-2 Pro bundle is the new Muvi K-Series smart LCD touch screen that features a better and clearer display, allowing you to frame your shot, preview videos, photos and navigate the menu to change settings and preferences with ease.

The large 1500mAh interchangeable lith-ion smart battery ensures that your K-Series stays charged for up to 3 hours of recording time, which makes it one of the largest batteries on the handsfree camera market.

The Muvi K-2 Pro has built-in Wi-Fi with a range of up to 60 metres, which allows you to connect and pair with your smartphone or tablet with the free iOS or Android app. The Muvi K-Series app allows you to live view, record and even share your content straight onto social media.

Just like the Muvi K-2 Sport, your Muvi K-2 Pro comes with a rugged protective carry case, so you can transport and store your camera and its accessories safely whilst on your travels.