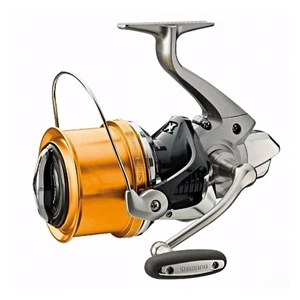 Hagane Gear
The HAGANE Drive Gear is produced by Shimano’s coldforging technology, without the need for additional machining. This delivers a longlasting smoothness, strength, lightness and power at the very heart of the reel. Traditional diecast, machined gears are less durable under heavy loads.

XShip
XShip is a combination of features that work together to create much greater efficiency. By positioning the pinion gear close to the centre line of the large diameter drive gear, more power is transferred from the handle to the rotor. The pinion gear is also supported by two Shimano ARB roller bearings. This creates more stability.

XProtect
The contact type triplelip structure is introduced to the roller clutch, the pivotal point concerning water resistance. In this structure, the first lip prevents water from entering through the space between the rotor and the body. In addition, the special grease between the second and third lip  where it makes contact with the rotor collar located at the upper part of the roller clutch  not only resists water from entering but also minimizes friction resistance. Without jeopardizing the ‘silky smooth rotation capacity’, the vital feature of STELLA SW, exceptional water resistance, has been achieved to withstand the crashing and splashing of waves and spray.

ARC Spool
Shimano ARC Spool is a patented spool design with an angled spool lip. This design enables the line to leave the spool with less friction and in smaller coils resulting in longer more accurate casts. ARC spools are proven to reduce backlash and wind knots when using braid.

One Piece Bail
The onepiece bail wire has no gap for line to snag on during normal operation. Made of Stainless Steel, it reduces friction and allows the line to get onto the line roller quicker.

Parallel Body
The Parallel Body feature implicates that the spool is lined out parallel to the rod. This results in the reduction of line touching the rod and subsequently this increases the casting distance.

Hi-Speed Drag
The "Hi-Speed Drag" is the fastest drag function ever  featured on a Shimano reel. Only a very small turn on the drag knob will transit the drag settings from 'free spool mode' to the 'fight mode'.