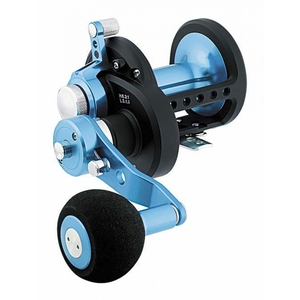 Prev
Next
« View all Multiplier Reels

The Rocket Reel Company Rocket Fuel - Yellow Label
Out of stock - Email me
£6.50

The Rocket Reel Company Rocket Fuel - Liquid Grease
Out of stock - Email me
£6.50

The Rocket Reel Company Rocket Fuel - Red Label
Out of stock - Email me
£6.50

Daiwa Saltist LD20 Twin Speed Lever Drag Reel. Anyone who values the function of a lever drag is certain to be chasing true sport species that are able to fight back... big time. Therefore the Daiwa design team have not compromised in their pursuit of reels that can deliver everything you would expect and more.

The lever drag feature offers three positions of engagement from Free to Minimum then Strike and passing onto Maximum. When engaged at Minimum you have enough freedom of spool travel for tossing baits away from the boat with the reassurance of no over runs.

And the level of control and power designed into these lever drags is truly staggering. Pre set at the Strike position on the standard 20 single speed you have over 13kg working for you. Close the lever home and you max out at an enormous 22kg. At the bigger end of the scale the two speed trolling 30 model delivers over 15kg at Strike and a over 30kg at the Maximum.

The twin speed function is also a major asset in the right circumstances. The aluminium frame, side plate and machine cut spool ensure precision, superior tolerance to tension and torque plus resistance to the rigours of salt.