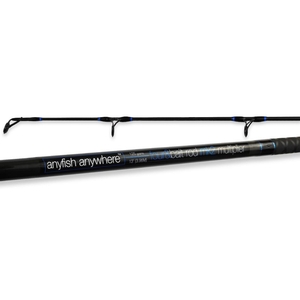 Anyfish Anywhere Four & Bait mk2 Multiplier Surfcasting Rod. This rod is available in the new and improved models as a mk2 version and at 13 and 14ft. The Four&Bait is designed primarily for lighter beach fishing, when the requirements of a 6oz lead, clipped and whacked are not the order of the day.

Due to its weight, or lack of it, it can be used as a bass rod and hand-held as well as being put in a rod stand. It has a lovely soft tip, which will allow the use of soft baits, but is also an ideal rod for larger baits at shorter distances e.g. bass in the surf. As a lighter beach rod it is also ideal for longer and lighter rigs given the opportunity.

Depending on your preference of reel up or reel down, the multiplier on the 13 and 14ft versions is accompanied by a sliding reel seat with x wrap on the butt section and is fitted with Fuji BNOG rings and made in 2 equal sections.

This rod is certainly not for the 30lb straight through type of angling on to heavy rough ground, but a rod for the more gentler area of coastline where sand and shingle (and probably mud) are under foot. Think estuary rolling surf and this the rod for you as with the Six&bait the Four&bait has also found its place in foreign limbs.

Think estuary rolling surf and this the rod for you as with the Six&bait the Four&bait has also found its place in foreign climes. It has been a true winner in Italy for bream and bass bringing catches into double figures, and also in NZ and Australia for kings and grouper well in excess of 10 lbs.

The Blue Label rod series has very quickly established itself as a new UK STANDARD in beach rod design and performance. These rods offer exceptional performance both in terms of casting AND fishing at a price point that makes them very accessible. They also offer sea anglers a road map into the sport, allowing many anglers to learn their own watercraft and skills before progressing on to more specialised forms of sea fishing.

Anglers have told how they bought a six&bait as their 'first proper rod' thinking that they would use it for one season and then upgrade, only to completely fall in love with it, and now wouldn't change it for the world. All of our blue rods are designed to be easy to use and will give you class leading casting and fishing performance. They WILL catch you fish, whether that's cod off the north east coast, or whiting from the shores of Kent.

great rods a a great price and great service thank you

The rods are very good I bought two 4 and bait and 6 and bait. The 6 and bait is stiffish with a pendulum unless its an ultra smooth and progressive cast but casting 6oz feels like Im casting 5. Great! Got used to the rods action after a couple of casts. Bad point: Ive had a day Id rather forget removing small sections of the diamond shrink wrap. Its somehow glued onto the blank and is a complete nightmare to get off: it doesnt peel off without leaving a stubborn uneven rubbery surface that needs sanding it also tended to rip off in uneven strips necessating the use of a modelling knife. Surely rod manufacturers realise that a lot of us like to put our own reel seats on? So if you want to glue on your own Fujis beware. Also on the 4 and bait the sliding reel seat didnt work but Im sure this was just bad luck. The reel seat on the Six and bait was fine.