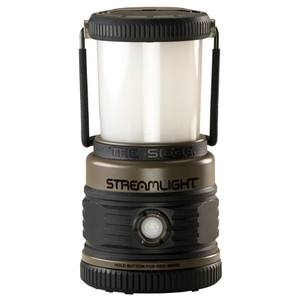 Prev
Next
« View all Lanterns

The new Streamlight Siege battery-powered lantern is compact and rugged, perfect for all outdoor and survival situations. Waterproof up to a depth of one metre, engineered to float and resistant to battery corrosion, the Siege is built to survive the harshest environments.

The rubber moulded base provides stability on slippery or uneven surfaces. Spring loaded D-rings on top and bottom allow the Siege to hang upright or in an inverted position. Removing the cover illuminates large areas, making it perfect for use as an overhead light for camping, expeditions and emergency lighting around the home.

The Siege features a battery level indicator with 12 days run-time on low, ensuring you have the power of its five C4 LEDs when you need them. Four white LEDs provide 340 lumens on high, with one red LED featuring flash SOS modes for emergency signaling. The Siege provides the security of bright light with 360 degrees of illumination in a versatile and portable lantern.

Brilliant lantern!&nbsp;Versatile, well made, rugged and excellent light output. Have used it for a few camping / fishing trips and when we had a power cut and it hasn't failed to impress me yet. Batteries seem to last ages.&nbsp;Afraid that my trusty Coleman petrol lantern has now been retired.