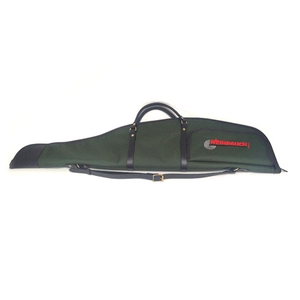 Prev
Next
« View all Gun Slips and Hard Cases

Really nice well made carbine slip,holds my HW 100 KT securely,unfortunately have to remove bi pod for rifle to fit in and bag to zip up fully,pocket on side would have been better if it was one large pocket instead of being divided into two thin compartments the lower compartment would be fine for a spare air cylinder.

I think the price was high considering the extra benefits of the deluxe version. The only difference I can see between the deluxe and the standard are a few bits of leather (two handles and a shoulder strap). The zip on the pocket was difficult to open because the pocket is stitched horizontaly half way down I think I read somewhere that they have done that to keep the rifles cylinder separate from things in the other half of the pocket. I dont know why you would take the cylinder off the gun or why you would carry a spare. I wouldve liked to have seen two separate pockets with separate zips or even more pockets. Things dont get better when you try to get the rifle in the slip. I have a small bipod and I couldnt get it to even come close to closing with that attached not even with moderator removed. Removing the moderator doesnt do anything except allow you to fold the end of the slip over. The rifle will fit with moderator on but zipping the slip up with my Sidewinder scope on was very difficult and if yo...

The gun bag is okay. A wee bit pricey.

Fantastic gun case i have stored in the accessories pocket a Tracer tactical 800 light unit it fits like a dream!!!!. Very well made and well worth the money. The gun slip hangs well when being carried and is great protection for your gun when travelling.If you've got a hw100 carbine then finish it off with a deluxe gun case. Top gun slip!!!!!!

i purchased the carbine rifle slip,i'm happy with the quality of it,my only gripe is the accessorie's pocket is not very deep,i managed to get 6x14 shot magazine's in it,along with a tin of pellet's,i think it would have been better if it was deeper.i do however like the fact that it's fleece lined.the leather strap's are good quality to,my opinion it's a little over priced.i will not buy another.

I wanted a quality case for my HW100T and hoped for something that would take both scope and bipod. Bipod really is too much of a squeeze and so I will be removing it. Fleece lined and with real leather trim which is a nice touch. Heavy duty zips with apallingly weedy tangs which will surely break in short order - not a problem as I can replace them with home made leather tangs but at this price... I shouldn't have too. Nice case and worth the money if you've nothing better to spend it on!!