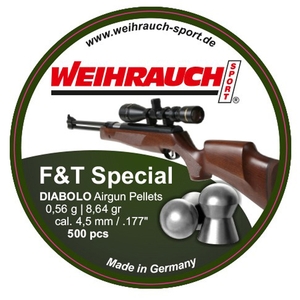 This product is only available to buy if you are over 18 years old. Why?

Thought I would try these in my HW100. Havent tested fully but have had a couple of tumblers which may not apply to whole batch. Overall a good quality pellet that hits the target

not tried these yet but they look good

Again superb pellets for my Weihrauch HW100 wouldnt use anything else

Best pellets for my wiehrauch

Superb pellet certainly tightened up my grouping at 30m. Well suited to my Weihrauch HW97K.

These proved to be the most consistent and accurate in my pcp and Uttings were one of the few places who had them in stock and were also the cheapest at the time for 10 tins of them delivered.Should last a little while..

Good quality pellet that runs through my Goldstar .177 with ease. Affected by wind because of light weight but otherwise a strong performer.

Was given a tin of these with my HW100T which l bought new, was hitting less than 5p groups at 35yds in minutes once zeroed in. l tried other pellets from club members, none were better and some didn't come close, ordered another 5 from uttings, l think I've struck gold with these pellets, great price too.

These are now my pellet of choice for my HW95K. There is a slight difference between these and the H&amp;N FTT when viewed through a magnifying glass ! As good as the air arms and jsb's but cheaper.

Had my original tin from a few months back (weigh'd in at 8.7gns), found they grouped very well in my HW95k(New) so decided to buy 5 tins, on testing the new batch they are as tight in the breech as hell as a result noted the muzzle energy to be down.Checked the mass of sample pellets which gives 8.9grns exactly(0.2gns increase), obviously the reason for their tight breech fit. However, tested them down range and they do group nicely.

Used with BSA Comet, Prosport and HW97K. Very accurate and consistent in all three, the 97K liking them the most. If they work with your rifle, they give very good value for money.

I tried lots of brands including JSB Exacts(several batches), Air Arms and Crosman Premiers before settling on these. No pellet I have tried groups as consistently well as these in my .177 BSA R10. I weighed a few tins &amp; found them to be extremely consistent not varying more than .15 of a grain. Much better in fact than the JSB's I had also weighed! They are very clean so no washing is req &amp; durable so no damaged skirts here, I wish I could say the same for the Air Arms I have tried.

These pellets are great in my BSA super ten, pellet on pellet almost at 30 yards. I tried loads AA field &amp; JSB all head sizes, but always come back to these :)

These pellets are almost identical, if not exactly like H&amp;N F&amp;TT, they chrono and fit the breech very well.Using them with Cometa 400 %2B HW77k One of the best pellets available but then what do expect from Weihrauch.

I have a Weihrauch HW77 and had been using Lasadome. These pellets are almost the same weight and I found I needed very little adjustment of the sight to make the switch. The pellets are slightly shorter than the Lasadome but have a thicker skirt so are lest susceptible to damage getting them out of the tin. The small flat below the dome is nice and will help front-end support. All in a good pellet, but then what did you expect form Weihrauch? But I do wish the tin had a screw tread lid.