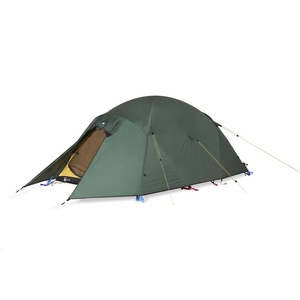 Prev
Next
« View all 1-2 Person Tents

The much copied but never bettered classic!

The Quasar is designed for mountaineers looking for an extremely strong tent and is at home in the mountains as it is at the poles.  Its strength, durability and space make it the perfect choice for longer term mountaineering trips or expeditions.

The definitive 2 person mountain tent is much copied, but never bettered. The exceptionally strong geodesic design is well proven having withstood some of the harshest conditions for well over two decades

The inner pitch first design of this this tent adds to its stability, makes it quieter than a tunnel tent in windy conditions and creates superb inner tension which prevents sagging and provides the largest usable space possible

The free-standing format means this tent is ideal for camping where the ground is less firm, as it doesn't rely on guy lines and pegs to support its main structure

Two entrances and porches allow sheltered access and plenty of space to store your gear. Each inner door has a full midge-proof mesh and full solid inner door, enabling a multitude of ventilation options depending on weather conditions

A combination of proven Terra Nova Watershed and Waterbloc fabrics provide excellent durability, UV resistance with superb waterproofing and the flysheet and groundsheet are taped for complete weather protection

Dyneema reflective guylines add more stability in bad conditions. Dyneema guyrope is three times as strong as standard guyrope of the same weight and has very low stretch for stability in all conditions

A Footprint which covers the area under the inner and porch is designed to prolong the life of the tent and help keep it clean. This can be purchased here

This was purchased to replace our 20 year old one of the same. You cant go wrong with this super strong yet reasonably light tent. We have done many of the UK national trails in our with our Collie. Fits the three of us nicely.

A big thank you Uttings, absolutely fantastic customer service, second to none!&nbsp;Had a problem with my first choice of tent and Uttings made the return and replacement of this one a stress free experience. Now I have my Quasar tent which I should have gone for in the first place, am yet to use it for the first time but I'm sure by other reviews and Terra Nova's reputation I have my years of happy camping to look forward too.&nbsp;Thanks again.

I bought my Quasar in 1993 - it wasn't cheap but I still have it and it is used by my son several times every year. It remains in perfect condition and is a joy to own and use. I found this site whilst looking for a source for a green flysheet. There isn't anything wrong with the yellow/grey one, I'd now just prefer a green one! At &pound;286 for a new flysheet maybe someone would like to swap!

Having bought a family tent for &pound;100 in 1989 only to have it break the following year, the next tent I decided to invest in was my Quasar in 1994. I have used it well almost every year since. Its netting above the entrances ripped a little with the rough terrain I usually camp in,but fixed it with micropore and needle and thread and has lasted thus for years. Nothing else has broken though now it is getting a little old but still water tight. I recommend them to everybody!

I have owned and used a Quasar for well in excess of 15 years and the only problem was a pole snapping in the Peak District in a force 8 gale. The pole in question was replaced immediately and without question when I took it back to the manufacturer in Derbyshire. Try doing that with a tent made on the other side of the planet. I have since bought a Terra Nova Solar, one man tent and my son owns the Ultra Quasar.